Mario, my partner in Papernomad, is from Vienna, Austria. Mark, who is the head of Griffin Technology and our US partner, lives in Nashville, USA. Both of them travel the world on busy schedules, thus meetings between the two require to be arranged weeks in advance.

On Saturday Mario and his wife Andreea flew to Denmark, staying at the Copenhagen Admiral Hotel. While they settled into their hotel room, Mark posted something on Facebook after which the mobile app alerted him of “Friends near you”.

What neither Mark nor Mario knew: they were in the same hotel, at the same time, on the same floor, just two rooms apart from each other. Nor were they aware that moments ago they had just visited the Little Mermaid – together but unaware of each other. 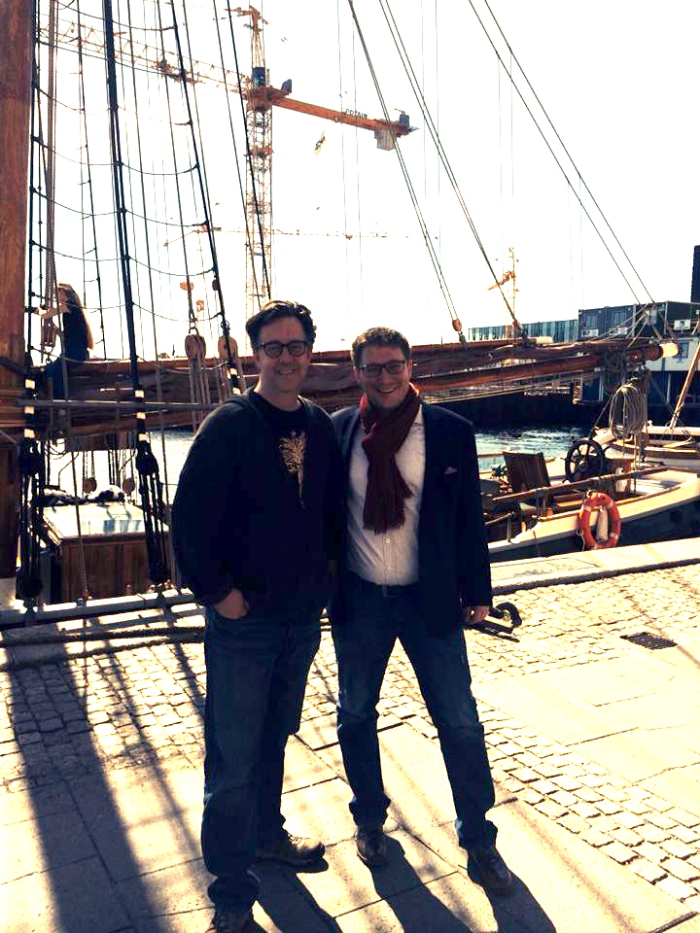 Mark and Mario in Copenhagen

I am not sure if Mark believes in synchronicity, but he certainly can be considered a person particularly associated with such events.

On his last visit to Vienna, while we were sipping our cocktails in a bar called Loos Bar, he received a text message from his wife Jeanne, letting him know about their family doctor’s recommendation of a tiny bar in downtown Vienna, where they served delicious cocktails… the Loos Bar.

The next thing Mark posted that day: “It’s a crazy coincidence when you unexpectedly run into someone you know in another country. But what are the odds you are staying in the same hotel? On the same floor?”

Mark, you should play the lottery.

Papernomad was created in early 2010 as a platform for the development and marketing of eco-event-seating: a cost-effective and environmentally sensible vehicle to promote a brand at music festivals, outdoorsports events, large functions or open air cinemas. These patented beanbags are made of multi-layer paper membranes which are sewn together along their four edges and filled with pop corn – or at leastsomething very similar to that. Both the paper and the filling material are recyclable, they can even be thrown in the compost. Great stuff, because they will leave a lasting impression on visitors but none on the environment.

The material that we use for our beanbags proved to be exceptionally tough: it is water proof, tear resistant, flame retardant and compostable. We therefore began to scout for niche applications where our paper can substitute “traditional” materials while increasing the performance of a product. In close cooperation with our suppliers of these high performance paper-composites we design and develop laptop sleeves, messenger bags, mobile phone skins … made of paper.

We are socially conscious designers, marketing professionals, artists and one or two lunatics. Our passion is to question existing systems and design sustainable solutions with respect to social and environmental issues. By merging creative assets with effective business practices we successfully produce refined results across a variety of projects: public art preservation, event marketing concepts, transitive lifestyle apparel and furnishing