A UniSA design graduate’s pioneering iPad protective sleeve made entirely of biodegradable materials has been stamped with the internationally renowned Red Dot for its innovative product design. 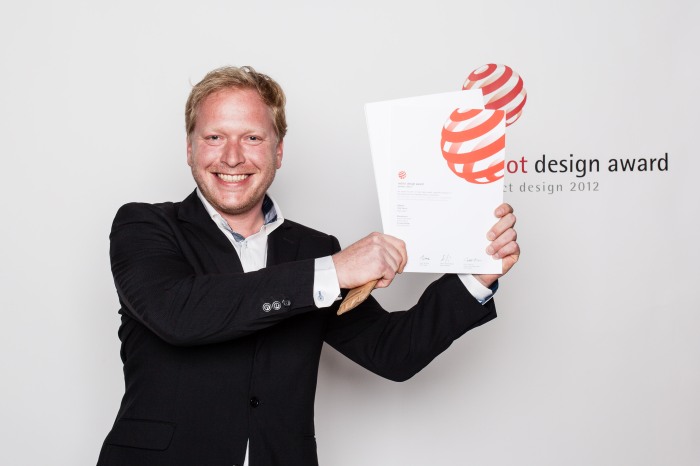 ‘Zattere’ is part of a range of eco-friendly sleeves for mobile electronic devices called Papernomads, which Rochna founded with friends Mario Bauer and Benjamin Kwitek. Rochna says the company’s focus is creating sustainable products that tell the story of their owners through the canvas-like quality of the paper-based sleeve.

“Papernomads are made out of several layers of paper and a bio-polymer membrane, combined with cotton padding, wool-felt lining and a pull-strap made from linen,” he says.

“The life expectancy of today’s electronic devices is rarely more than a couple of years. Why protect them with plastic covers that will likely outlive the device by decades? Paper is the perfect analogue counterbalance to the glass and plastic digital world that surrounds us. The paper on the products can be used to capture our experiences such as quick scribbles, coffee stains, finger prints, telephone numbers or the occasional lipstick impression. A Papernomad can create reference points in time for us to remember who we are.”

Established in 2010, Papernomad’s popularity has grown quickly with the products now being sold in 23 countries.

The Red Dot Award, chosen by an international jury of 30 design experts, gives the product a mark of quality recognised around the world. The award, which began in 1955, is one of the largest and most prestigious design contests in the world with 4515 registrations from 58 countries entering the product design competition this year.

Rochna, who now resides in Austria, is both excited and surprised by the recognition the product has received.

“To me personally the award means some sense of official acknowledgment. We have received an overwhelming positive response from everyone … This has always puzzled me, because at no previous stage in this project did I have the feeling that our product was refined and finished. I think that we still have to go a long way, but at least we have received this official ‘seal’ from a jury known to be rigorous within the industry,” Rochna says.

The young designer majored in Sustainable Design at the School of Art, Architecture and Design, a leading provider of the multidisciplinary study of Sustainable Design in Australia. Rochna says his time at UniSA equipped him with tools that have helped him in his design career.

“I have always wanted to be a product designer. Studying design at UniSA has helped me in my chosen career – not so much in the sense of acquiring the tools for the job but much more in the sense of learning how to find those tools,” he says.

“In the second half of my degree, the projects I undertook became increasingly tangible and points of contact with the real world and the industry more frequent.”

After graduating, Rochna pursued a career in exhibition design before his passion for product design was rekindled, after an overseas move and a subsequent lack of belongings inspired him to create paper-based beanbags. The paper composite he developed is now the main component of Papernomad.

This is an article by Rosanna Galvin – Media Liaison Officer at University of South Australia http://w3.unisa.edu.au/unisanews/2012/July/story6.asp

Papernomad was created in early 2010 as a platform for the development and marketing of eco-event-seating: a cost-effective and environmentally sensible vehicle to promote a brand at music festivals, outdoorsports events, large functions or open air cinemas. These patented beanbags are made of multi-layer paper membranes which are sewn together along their four edges and filled with pop corn – or at leastsomething very similar to that. Both the paper and the filling material are recyclable, they can even be thrown in the compost. Great stuff, because they will leave a lasting impression on visitors but none on the environment.

The material that we use for our beanbags proved to be exceptionally tough: it is water proof, tear resistant, flame retardant and compostable. We therefore began to scout for niche applications where our paper can substitute “traditional” materials while increasing the performance of a product. In close cooperation with our suppliers of these high performance paper-composites we design and develop laptop sleeves, messenger bags, mobile phone skins … made of paper.

We are socially conscious designers, marketing professionals, artists and one or two lunatics. Our passion is to question existing systems and design sustainable solutions with respect to social and environmental issues. By merging creative assets with effective business practices we successfully produce refined results across a variety of projects: public art preservation, event marketing concepts, transitive lifestyle apparel and furnishing